The last century saw many epochal moments perhaps unprecedented in the previous one thousand years. The last century witnessed the First and the Second World Wars, the end of colonialism, and the birth of many nations in Asia and the African continent. If the first and Second World Wars defined the first half of the 21st century, the second half was dominated by the Cold War when the United States and the erstwhile Soviet Union dominated and led the global narrative.

However, the Cold War came to an end with the dissolution of the Soviet Union between 1988 and 1991 due to decades of bad economic policies and the war in Afghanistan which drained its economy. Once the dissolution of the Soviet Union happened, which was seen as a victory for the West led by the US, new nations emerged from Central Asia to Eastern Europe, and with that, the seeds of the present conflict that we are witnessing between Russia and Ukraine was sown.

During the height of the Cold War, the world was divided into two groups, particularly in Europe. Once powerful Western European countries like the United Kingdom, France, Germany, and Italy were going through a post Second World War period of economic reconstruction. America had emerged as the most powerful and richest nation in the world. It took the responsibility of rebuilding Europe and in that process in 1949 formed the North Atlantic Treaty Organization (NATO) which became a formidable military alliance. After acquiring the know how to make nuclear bombs in 1949, the Soviet Union which perceived the NATO as a direct military threat to its hegemony in East Europe in 1955, formed the Warsaw Treaty Organization (WTO), officially the Treaty of Friendship, Cooperation, and Mutual Assistance, or the Warsaw Pact. However, the Warsaw Pact became defunct after the collapse of the Soviet Union but NATO was and still is the main military umbrella for Western Europe.

Many experts started to think that NATO had outlived its utility and had served its purpose after the end of the Cold War. However, many of the newly freed Eastern European countries that lived under communist oppression wanted democracy, and with that came the US financial aid. The post-Cold War reconstruction program of former satellite states of the Soviet Union became the second Marshall Plan and with that a promise of prosperity and the protection of NATO i.e. bilateral defense treaties from any future threats. 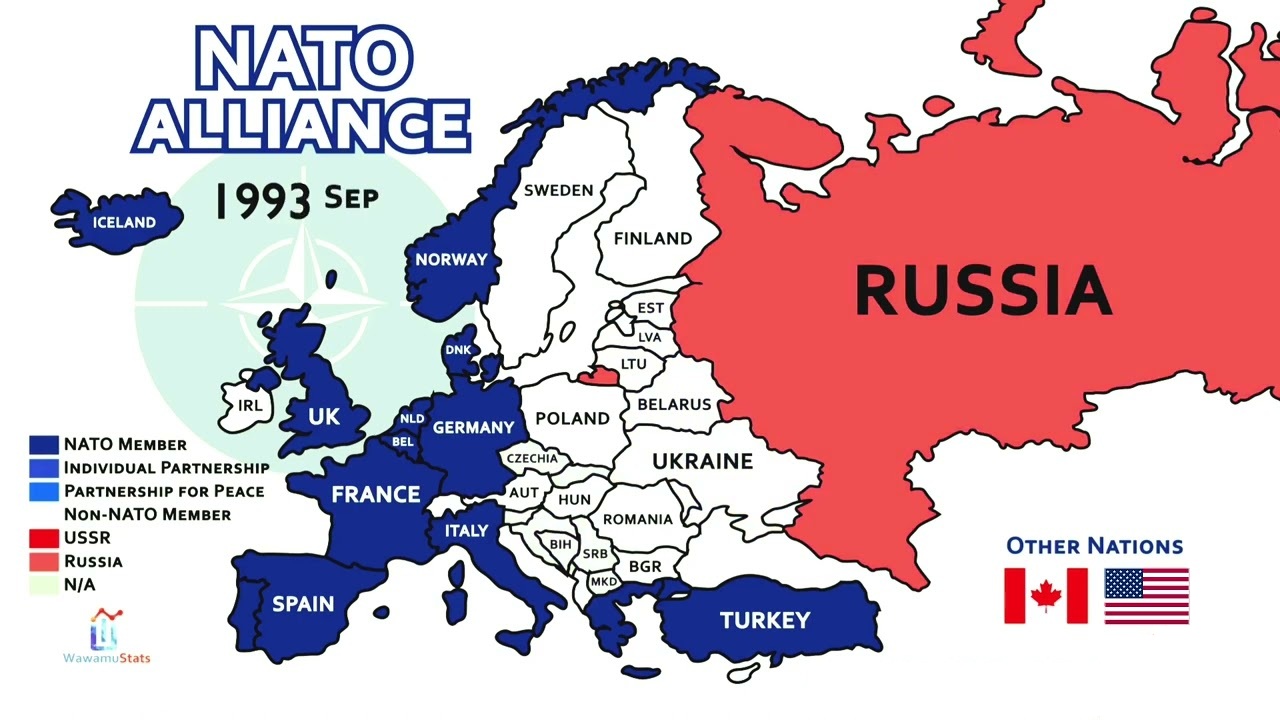 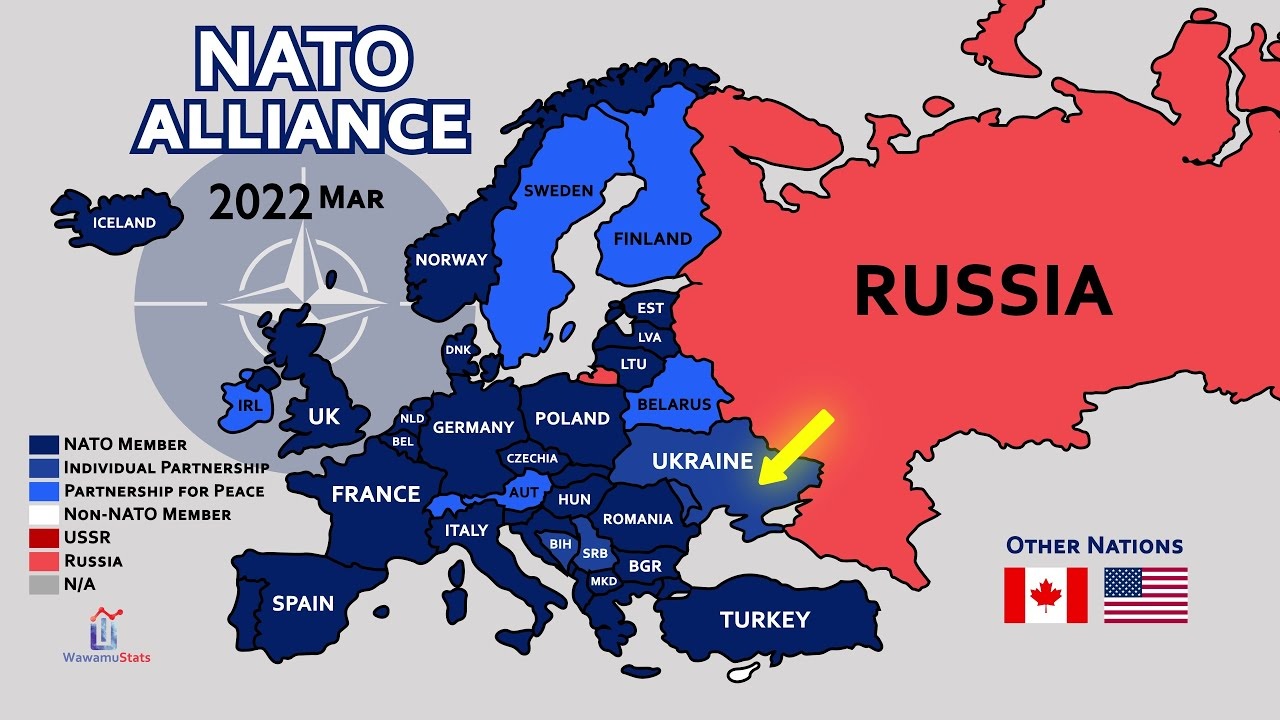 After the disintegration of the Soviet Union, the US and its West European allies promised that they would not expand NATO towards the East, but slowly things began to unravel. For Russia, the memory of the Second World War was still fresh and it felt the need for a buffer and was under the belief the West would hold its promise of not expanding NATO. But former Warsaw Pact countries like Poland, Hungary, and the Czech Republic became NATO members in 1999 less than a decade after the Soviet Union ceased to exist. Former satellite states like Latvia, Lithuania, and Estonia, also integrated into the European Union (EU) and the North Atlantic Treaty Organization (NATO).

This was unacceptable for Russia as NATO was at its borders but the straw that broke the camel’s back was always going to be Ukraine and the attempted regime change in the resource-rich Kazakhstan. However, Russia had already made its intention clear in 2008, when it had attacked Georgia because of its desire to join NATO.

If that had happened, Russia, which primarily runs its economy by selling military hardware and natural resources like oil and gas would have faced economic ruin because though Georgia has no notable gas or oil reserves, its territory hosts part of the Baku–Tbilisi–Ceyhan pipeline supplying oil to Turkey. This pipeline was not acceptable to Russia, Iran, and Gulf countries as the pipeline circumvents both Russia and Iran and that would have decreased Western dependence on Middle East’s oil. Ironically, in 2008, when American President George W. Bush wanted Membership Action Plan (MAP) to be given to Georgia and Ukraine, Germany and France had said offering a MAP to Ukraine and Georgia would be “an unnecessary offense” for Russia. In response to the US, President Vladimir Putin has said that any NATO enlargement towards Russia “would be taken in Russia as a direct threat to the security of our country“.

After the fall of the Iron Curtain, Russian President Boris Yeltsin launched a series of economic reforms to the likeness of the West. However, the US continued expanding its military alliance to include former Soviet states against Yeltsin’s objections. In fact, the U.S. Secretary of State James Baker under President George H. Bush had made it very clear to Soviet leader Mikhail Gorbachev when he said, “there would be no extension of NATO’s jurisdiction for forces of NATO one inch to the east,”. West German Foreign Minister Hans-Dietrich Genscher on January 31, 1990, declared, “What NATO must do is state unequivocally that whatever happens in the Warsaw Pact, there will be no expansion of NATO territory eastwards, that is to say, closer to the borders of the Soviet Union.”.

The Clinton administration and the leaders of France, Germany, and the United Kingdom, ignored Russia’s concerns as NATO’s expansion continued under President George W. Bush. However, after Vladimir Putin became President he decided on a more kinetic approach when he militarily intervened in Georgia and Crimea. It had been analysed that Russia would view NATO’s expansion as “unfriendly at best, and a threat to its security at worst”, as NATO encircled Russia. Former Secretary of State Warren Christopher under President Bill Clinton told Yeltsin that Russia will be part of all future security of Europe under the “Partnership for Peace“, and it would be a partnership and not a membership and there would not even be an associate status for the former Soviet States and its satellites.

Yeltsin wanted Russia to be part of Europe and felt he was responsible for overthrowing communism and wanted his country’s place in Europe recognized but the US who had promised zero expansion lied to him and he was not in any position to push back. The reward for such hubris got the West a leader in Putin who saw his country humiliated on all forums and in 2008, he went to war with Georgia to prevent it from joining NATO. Putin in 2008 had drawn the red lines when it comes to NATO and the European Union getting close to Russian borders. For Vladimir Putin, the 1990s was a decade of humiliation as Russia was weak and one can even blame its President Yeltsin for failing to understand the Realpolitik of the U.S. All Russia wanted was a seat at the table in Europe and be able to hold its head high, instead of the U.S wanted Russia to be its junior partner which Putin saw as humiliation.

After the end of the Cold War, the United States could have easily improved its relationship with Russia, instead, it plotted to weaken and demean a powerful nation by expanding NATO. In 1997, NATO and Russia signed the Founding Act on Mutual Relations, Cooperation, and Security, a road map for would-be NATO-Russia cooperation which now lies in tatters. The U.S’s push for Ukraine to be part of NATO has, in fact, weakened the organisation. It is clear that the US wants Russia to bleed slowly and in that process execute a regime change. The United States did win the Cold War but it wanted all the terms of settlement in its interests. For Russia, the NATO expansion was no less humiliating than the Treaty of Versailles which Germany was forced to sign from a position of weakness.

(The author is a freelance writer and has published articles on defence and strategic affairs. He tweets @LaxmanShriram78. Views expressed are author’s own)